Video Transcript: All Solas propellers have a nine digit part number. They're divided into three sequences.

The last sequence represents the pitch. In this case, the propeller would have a nineteen inch pitch.

Rubex propellers have an interchangeable hub that allows them to be used on a variety of engines. All Rubex propellers start with the number nine and use the same numbering system as the Solas propellers.

Visit the Boat Propellers home page and use the Prop Finder to find the styles and sizes of our propellers that fit your engine or drive system. 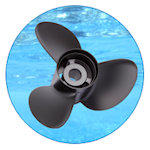